Posted on August 23, 2015 by honestindiebookreviews

Let me begin by saying that writing a novel is a terrific achievement. I know, having written two. My hat is off to anyone who can complete a novel.

That said, here is my honest opinion of Super, a first-person superhero story by Princess Jones

Characters: Audrey Hart, under-achieving superhero, narrates her tale of fighting crime and helping others while trying to survive family relationships and the work-a-day world. She has more success fighting crime.

Audrey’s power isn’t particularly spectacular. She heals incredibly fast. Being hit by a car, or shot hurts her, just like you or me, but her body heals within minutes, though not without soreness and stiffness, again like you and me. Her super power is just enough to get her into the game, without making it easy.

Author Princess does a terrific job with Audrey, bringing her vividly to life on all three fronts — physical description, dialogue and action. Here’s Audrey’s description of herself, arriving late to work after stopping a purse-snatcher who had victimized a little old lady:

Mellie looked me up and down. “You get hit by a bus or something?”

If you only knew. I imagined what she saw: Reddish brown hair in a frizzy, messy bun with twigs and leaves sticking out of it. A brown smudge on my freckled cafe au lait face that I hoped was mud and not any of the various animal and human shit you might find in a New York City park. Nondescript business casual clothing–gray slacks, white blouse, sensible shoes–that had already seen better days before my little adventure. Various stains covering my shirt and pants.

Mellie, one of Audrey’s few friends, is part of a terrific cast of supporting characters that includes mom and dad, and over-achieving sister Ella. Ella, interestingly enough, has her own set of problems brought on by being brilliant and super-competent.

There’s also a bad, though clueless boss, an uncaring drycleaner — through the entire book, Audrey is unable to rescue her super-suit from the drycleaner’s — assorted petty criminals and thugs, and one nasty super-villain hidden away in plain sight, with a plan to — well, you’ll see.

I took a quick look around the one room apartment. Dirty clothes spilled out of a couple of laundry bags in the kitchenette corner. The unmade futon along the wall featured a jumble of sheets, the faded tee shirt I slept in every night, and my ancient laptop. Everything seemed just like I’d left it this morning. I spotted the dry cleaning ticket sitting on the coffee table on top of the pizza box from last night.

Streets, alleys and sidewalks of the underside of the big city are all wonderfully described, by an author, I’m guessing, who knows them well.

Plot: While trying to do what good she can in the urban district assigned to her by the superhero council, Audrey must also live a normal life of work, laundry, family and friends. While each, on its own, is do-able, together they create an almost insurmountable challenge.

What I thought could’ve been done better: I got nothing here. I enjoyed every delicious word of this delightful book. The only possible negative thing I could say about Super, is that it made me grind my teeth a little over how easy Princess makes it look. As an author, I know — it ain’t easy.

What I thought was good: Everything. Characters. Settings. Plot. Dialogue. The book is easy to read. Here’s a random sample from the beginning, where Audrey stops the purse-snatcher. Any other piece of Super I could’ve chosen would be just as good.

I pulled the last of my stored energy and launched myself into him, tackling him to the ground. We slid into a messy tangle across the concrete sidewalk. I could already feel my skin ripping and bruises forming from skidding along the ground. It was small compared to what I’d already been through but I knew it would heal in just a few minutes, too.

He spoke first. I was too busy hyperventilating to push any words out. “What the hell, bitch?! Get your big ass off of me!”

Well that was just rude. But it gave me strength to lift myself off him and rise to my feet. He started to get up but I placed my foot on his neck to stop him. I looked down at him, using what I hoped was my most menacing face. “You know what the hell, asshole. Is that your purse? Do you shop in the Golden Girls section of Target? Give it back.” I moved my foot and made a gimme gesture. He handed me the purse.

He sat up and turned his head to spit, dislodging some of the dirt that he’d eaten when he hit the ground. “Fine. There’s no need for you to go all Jackie Chan on me.”

He looked young. Maybe not much older than fifteen. He was skinny, too. And honestly, he didn’t look all that smart, either. The glazed over look on his face didn’t exactly scream “criminal mastermind.” Suddenly, I wasn’t so proud of myself anymore. “What are you staring at?” I asked.

“You. You got hit by a car back there.” I repeated the assurances I’d said to humans most of my life. “It just clipped me. It looked worse than it was. Besides, it’s your fault because I was chasing you. What are you doing out here anyway?”

He gave me a sheepish shrug that made him look even younger. “I’m a rapper.”

He sighed. “I’ve been coming up with some rhymes and I got some beats but I need authenticity.”

The kid looked at me like I was an idiot. “Yeah. I can’t rap about living the life if I don’t live the life. You know?”

I was no expert on rap but I knew this was too stupid to work. “So you’re going to steal purses from little old ladies to help your rap career? That doesn’t even sound right. You’d have to deal drugs and shoot people or something.”

“You think I should deal drugs and shoot people?”

“No!” The last thing I needed was him getting any ideas from me. I pulled him to his feet. No one was paying too much attention yet but this was straight out of the handbook of how not to be discreet. I didn’t want to push my luck any further. “You should be in jail right now but I think you’re too stupid to survive in there. Now go do something with yourself. Go find something else to rap about.”

Okay, this excerpt is way longer than I normally use, but it illustrates everything I liked about the book. There’s action, great dialogue, physical description, self-deprecating humor, and more.

Overall: Super is a marvelous book on many levels. It’s a fun superhero adventure, and also a comedic look at contemporary life, work and family. Princess blends in a healthy dose of sympathy for the human condition. Most of all, it’s a good story, skillfully penned, about a sympathetic character, always ready to help, even though she can’t seem to get her costume back from the dry cleaners, get on her boss’s good side, or get along with her sister.

And for sexy superheroine paranormal sci fi romantic adventure thrillers, check out my own novel American Goddesses on Amazon or Smashwords, and the newly published sequel Rogue Goddesses ~ thanks for visiting Honest Indie! 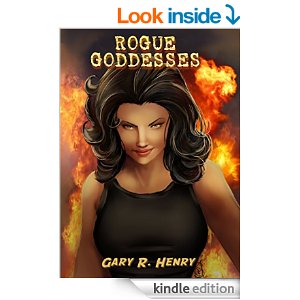 Reader, writer, runner, dog dad
View all posts by honestindiebookreviews →
This entry was posted in Uncategorized. Bookmark the permalink.

4 Responses to Super by Princess Jones