Posted on January 2, 2012 by honestindiebookreviews 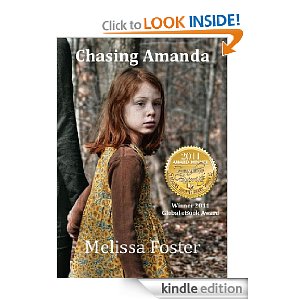 Let me begin by saying that writing a novel is a terrific achievement, and one that I have yet to make. My hat is off to anyone who can complete a novel.

That said, here is my honest opinion of Melissa Foster’s Chasing Amanda, a paranormal-mystery story which I finished reading yesterday afternoon.

Characters: Melissa’s characters are well-developed, multi-dimensional people, beginning with her protagonist Molly Tanner. Melissa brings them to life by describing what they look like, and gifting them with convincing dialogue and action.

Even minor characters, like Harley Mott, an elderly good-old-boy who hangs out with his two buddies in front of the local country store, get some description — “A burly farmer with slicked-backed graying hair, he had an imposing presence…”

It’s not a ton of description, because Harley isn’t a main character. But it gives our imaginations something to envision. It adds texture and believability to the story’s background.

Plot: Our protagonist, Molly, an attractive, 38-year-old, auburn-haired Mom who stays fit through running, has taken it on herself to help find a missing local 7-year-old girl, Tracey Porter. Molly isn’t a detective or a relation — she’s driven by guilt from a missed opportunity to stop another child abduction, years before, in another city.

An undependable paranormal ability, “The Knowing,” which appears to be something like psychometry, keeps Molly focused on her quest, even at the expense of her relationship with her skeptical, handsome husband, physician Cole Tanner.

Settings: The story takes place mostly in Boyds, a real-life small town in rural Southeastern Maryland, not too far from the Virgina state line, and just North of Germantown, Md. A network of scary underground railroad tunnels and a spooky old Victorian house add some dark flavor to the autumnal setting.

What I thought could’ve been done better: A little more description of Boyds would have helped anchor the story further in reality. I enjoyed the brief description of the Blue Fox bar and grill, a real location in nearby Winchester, Va., where Molly has a secret meeting with another character.

Ian Fleming’s James Bond novels, of course, are one of the top examples of how incorporating real places can enhance a story. When done well, the location can become as much of a character as any of the protagonists. Melissa certainly described the parts of her locale immediately important to the plot – the Blue Fox for instance.

As a reader in Lawrence, Kan., however, I would have loved Melissa’s overall perspective on and description of this little rural town. I think this was a missed opportunity.

My other point may be more of a reflection on me as a reader, than on Melissa’s writing, but I’ll mention it anyway. The “Amanda” of the title refers to the abducted child in Molly’s past. Molly actually saw the abduction in progress, but didn’t recognize it for what it was. Only days later when the story hit the media did she put two and two together.

Molly is understandably horribly traumatized by this. She and her family move to Boyds to try and make a fresh start. All good and credible — where I ran into a small problem was in the story’s beginning:

And a few pages later:

“Cole had stepped into the roles of both mother and father while Molly struggled to come to grips with the trauma that had befallen Amanda.”

The intensity of feeling Molly has for the disappeared and presumably dead Amanda was — to me, anyway — consistent with that of a mother for her lost daughter. I thought at first, and really for a good chunk of the book, that Amanda was Molly’s daughter, though this was not the case.

Maybe a line early on — “Though not her daughter, Molly felt the pain of her loss keenly, nonetheless…” would help clarify things for readers like myself who are too ready to jump to unwarranted conclusions.

Like I say, though, this is probably more of a reflection on me as a reader than on the story.

What I thought was good: Got all day? Almost from the first line, I realized I was in the hands of a skilled, professional writer. The mechanics are near-flawless. Active voice, vivid verbs, sentences of varied lengths all permit us to stay under the story’s spell.

I already mentioned the good job Melissa did with her characters. What I didn’t say was that Melissa seems to find something worthwhile or sympathetic in nearly all of them, good and bad. I’ve said it before: compassion is one mark of a great writer.

Plot was well-structured and well fleshed-out with details of people, place and things. While Melissa didn’t go as far with setting as I thought she might, what she did provide was more than enough to carry the tale.

Melissa employs well the skillful misdirection of professional mystery writers, while providing all the clues you need. I will say that I had a strong, and as it turns out correct, suspicion of who abducted Tracey — but not till I was 75 percent or so through the book.

“The Knowing” — the near-debilitating flashes of psychic insight which hit Molly at inopportune times throughout the story — is a truly spooky device. Might make a good title for a sequel.

Melissa’s action-packed ending is highly satisfying. She wraps up all the loose ends very neatly (maybe too neatly) in an epilogue at the book’s end.

Overall: So who writes a perfect story? I’d say Melissa is well on the way with “Chasing Amanda.” I can heartily recommend it as a compelling, character-driven mystery with a paranormal edge. She gives you all the clues, and makes you (well me, anyway) feel throughout that the solution is tantalizingly close — while keeping it just out of reach. Good job Melissa!

The Ophelia Trap by Kate Burns

Reader, writer, runner, dog dad
View all posts by honestindiebookreviews →
This entry was posted in Uncategorized. Bookmark the permalink.